Driving from the airport in a sliver Skoda (another rattletrap rental car, but I only have this one for a week). The radio was fiddly; even RTE1, the country’s primary all-purpose radio station, the equivalent of NPR but with ads, was fading in and out. Suddenly the word Berkeley came through clearly, followed by tragedy and students. Over the next few minutes a story began to unfold in fits of disconnected sound. Balcony collapse. Students injured. Students dead. Twenty-first birthday party. Irish one and all.

The tragedy has sunk the country into deep mourning. The smallness of the island is emphasized when something like this happens: So many people here know one of the students or know someone who does, or they know someone currently on a J1 visa. Even I know someone (who, luckily, is in New York, not San Francisco). This year 8,000 Irish students used J1s to travel to the US.

The JI visa is a rite of passage in Ireland. For those college students who can afford it, the visa is akin to study abroad, although the trips are all to the U.S. The four-month summer trips are in some ways a ghostly legacy of the original Irish migration: students don’t travel to study but to work, as bartenders, barristas, wait staff and restaurant hostesses, the twenty-first century equivalents of street sweepers, rag pickers and other less salubrious jobs taken on by those Irish who managed to survive the famine and the sea journey in the 1840s. Since 1965 over 150,000 Irish students have travelled to the US on J1s. 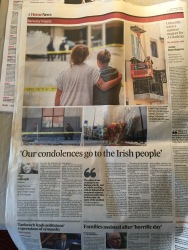 As I stood in a short line at the newsagent’s to buy an Irish Times the next morning, the accident was of course on everyone’s lips. It was a man standing behind me in line—a worker wearing a denim shirt with his company’s logo on it—who told me about the New York Times article. He was irate, and we discussed the articles and its implications as we left the shop, the man saying that the Times was the paper of international record, which made the article even more base and infuriating in his mind.

‘Death of Irish Students in Berkeley Balcony Collapse Cast Pall on Program’ read the headline. Lead reporter Adam Nagourney chose to focus on a 2014 incident in the Sunset district of San Francisco in which ‘loaded Irish students’ supposedly trashed the house they rented, smashing windows and punching holes in the walls, then ‘abandoning the place without a heads-up or a word of apology.’ Nagourney is quoting a column written by an Irish arts and culture editor that appeared in The Irish Voice, which was I suppose Nagourney’s way of covering his own tail—since an Irishman wrote it, it must be true. The article then went on to mention a Facebook page set up by Irish students in, of all places, Isla Vista, while never mentioning the particular notoriety of that community as a heavy party town. The article suggests that it is the Irish who are establishing the ‘work-hard, party-hard lifestyle. ‘ It doesn’t say that hordes of American students attend UCSB to avail themselves of the party atmosphere that overtakes the residential area (really a student ghetto) next to the university every Saturday night.

The insult of this article, with its raw prejudice and stereotyping of the Irish as unremitting drunks, could not have stung this country more. The Irish as a people know their own history. The country sees the J1 students as young ambassadors, and the population is proud of the connection forged between two nations that has, they thought, moved past the days of signs posted all over America saying, No Irish Need Apply. In print, online and in the media Ireland has projected dignity and pride in their response to the Times’ slur. They have taken the same measured but clear approach in calling out any suggestion that the students are in any way at fault. Reportage has uncovered past lawsuits over building lapses on the part of the contractor responsible for the Kittredge Street apartments, they have disproven the suggestion made by a Berkeley Planning Commission member that the collapsed balcony was meant to be decorative rather than functional.

Meanwhile, the country grieves while it holds its collective head up with pride, sorrow and hope.

1 thought on “A tragedy & a travesty”