Dublin is a city for the theatre-mad. Ever since W.B. Yeats and Lady Gregory opened the Abbey Theatre in 1904 as the national theatre of Ireland, theatre has been cherished. In the correspondence of Elizabeth Corbet Yeats, Willie’s younger sister, she mentions the Abbey frequently, always referring to the packed audiences.

This summer the Abbey is producing The Shadow of a Gunman, the least-known play of Sean O’Casey’s trilogy (with Juno and the Paycock and The Plough and the Stars). The action of the play takes place in 1920, between the 1916 Rising and the establishment of the Irish Free State in 1922. O’Casey was a Socialist who took on the story of the working class in his drama. The Shadow of a Gunman considers both the bravery and foolishness of the revolutionaries but doesn’t flinch from the cowardice, and the tragedy.

The Abbey’s production is dynamic, but ultimately the play remains a period piece, which is why the theatre is not, in this case, packed, but respectfully full. This is also possibly not a play that draws tourists, a generally reliant audience in the summer. (Across town Mamma Mia and Once are probably doing well.) As I watched the O’Csey play I realized that, after all the plays I have seen here, I may be gaining a deeper understanding of Irish theatre; I also realized that Enda Walsh has a lot of answer for in his absorption of O’Casey’s influence.

Earlier in the day I saw a walking play, Glorious Madness. The theatre company is calling this a Prologue, and in fact many arts organizations are gearing up for the 100th anniversary of the 19196 Rising. The play focused on the women of the Rising, who are often overlooked. The women’s organization, Cumann na mBan, has been largely forgotten, and the women who risked their lives along with the men have not been acknowledged by history. (The O’Casey play also considers a young woman hero, as it turns out.) As we followed the actors to several sites which would have been in existence in 1916, we were able to get a flavor o the complex set of events that brought about the ultimate failure of the Rising. 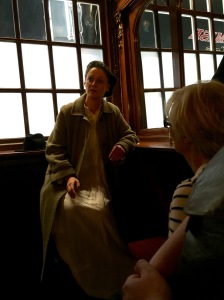