The weather is crap. Not unsettled, not breezy, certainly not soft. Crap. The trees are heaving in the wind, the sky is the color of nickel, sheets of rain come and go. I will probably have to build a fire later since the bedroom heater can’t do more than take the chill off even my tiny gate lodge. Welcome, as they say, to summer in Ireland.

During the 45 minutes or so that it takes me to get there I can’t stop thinking about the absurdity of driving on one-lane roads with two-lane traffic toward a place that lives on tourism and crystals and that in any case I wouldn’t be able to enjoy because of the weather. What Tara does have, however, is a bookshop.

The Old Bookshop (forgive the name and the uncial letters) is a speck of a space carved out of an old stone outbuilding. The shelves holding the books are made of raw pine by a not very skilled hand, the kind of shelves that will give you splinters if you’re not careful. The place is suitably stuffed with books in teetering piles, but they are organized if somewhat sloppily labeled. As I enter the proprietor greets me with a sort of grunt. His back is to the door and he does not turn around. Music is playing softly from somewhere, clearly not for the browser but for the owner. I am the only customer in the place, but then it is a Tuesday afternoon in miserable circumstances.

All of the books are secondhand, and at least 80% of the books are Irish in some way. There is Irish history, Irish mythology, Celtic studies, Irish art, Irish drama, Irish literature, Irish tour guides, Irish landscape and nature books, memoirs of growing up in the Irish countryside or on the Aran Islands, books printed in Irish. Since this is the Hill of Tara, center of mysticism in Ireland, there are plenty of books near the door on everything from druids to yoga. The bulk of the stock, though, suggests that the gruff man behind the counter caters to the crystal trade only with reluctance. This shop is owned by the dying breed of a real bookseller. 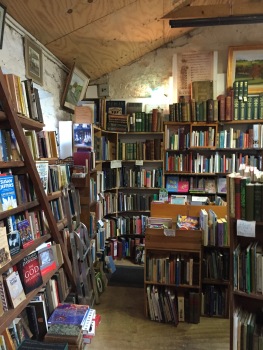 There are lots of books I like. There are even the two recent memoirs about the Yeats sisters, the subject of my summer research, but I have copies of both back in the States and resist the impulse to buy second copies to keep here. In the middle of a small shelf of work by Sean O’Casey I spot a delicate clothbound volume of Yeats’ The Tower, with plain gold inlay in a pure Art Deco style. Amazed that the owner has misfiled such a find, I open it only to see a funny note inside, Not for Sale. I wonder for a moment if someone has hidden it and put a trick note inside, but it isn’t far enough from the Yeats books to be invisible. Reluctantly I put it back.

I settle on four books, many more than I should buy given the fact that I have nowhere permanent to keep them in Ireland and that it is prohibitively expensive to ship them to the U.S. When I take them to the counter the owner looks up for the first time. He goes through them and says, Nice books. Ah. I have him now. I have seen this so many times before: I walk into a used bookshop and am automatically dismissed by the person behind the counter, usually the owner. When I return with purchases the person sits up and comments, surprised to see that I have laid hands on some of the better books in the shop.

He tots them up—they add up to €46—and says, €40. Thank you, I say, and hand him my card. Now I get instructions to go next door to the teashop and tell the person at the till, €41 for Michael. She will keep the extra euro to pay for this service. When I come back with the receipt (which he doesn’t bother to look at) he says, I’m glad you got the book on the Irish Revival; you might be interested in a book I have here. I know immediately which book he means. He pulls The Tower off the shelf and tells me that his wife, now dead, bought it for him years ago as a special present. I said I had spotted it among the O’Casey plays and agreed that it was a fine book. But why keep it here, I ask? It seems vulnerable. Yes, it is, he says, but why have it hanging about at the house where no one would ever see it.

When I cross the road to the car park I realize the sun has come out, at least in a watery sort of way, and that I can see across the valley. The Hill of Tara is behind me, but I don’t even bother to go. Instead, I salute the view and drive home with my purchases through sunnier terrain, texting Esther at some point to suggest dinner at Furey’s Bar, an invitation she readily accepts. 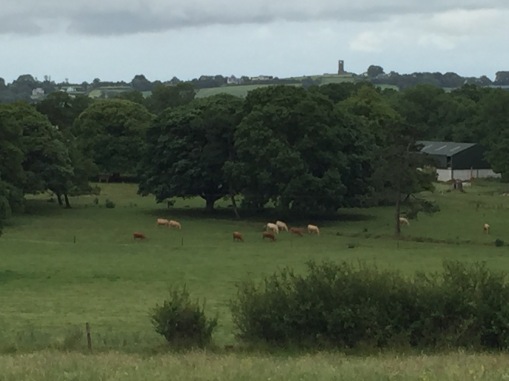