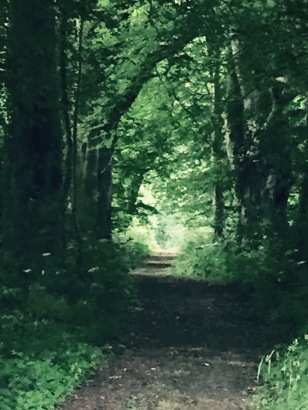 Woke up to a fine morning here, and took a last walk through the Ballindoolin woodlands. The woods are quiet and gentle; there is no sense of menace in them. The only creatures I am aware of in these woods are birds; they fly up from the ground when I get close, and they sing. Despite a few attempts to learn something about Irish birds, including one summer when I borrowed a pair of binoculars and invested in a small bird book, I remain ignorant. What I know are rooks and crows and magpies, finches and tits, and robins of course. I know the ubiquitous call of the woodpigeon; when I was in Tipperary I began to think that I would not be able to live there because the long whine of the woodpigeon was so relentless.

Another bird I know now is the swallow (although I still don’t know swallows from swifts, except that there are fewer swifts). Up to this year a swallow nest on top of the porch light greeted me every year when I arrived. I began to get used to having the nest but leaving it there was not without hazard. The parents would regularly dive-bomb me as I came and went in case I had any designs on their young, and I spent a lot of time ducking as they zoomed in close in an intimidating manner. Because the only real means of creating air circulation in the gate lodge was to leave the front door open one or the other of them would routinely make too large a swoop and end up in the front room. Then I would run around closing the shutters so that the bird would know to fly toward the light of the open door. 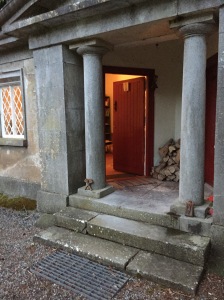 The nest was made of compacted mud, and the babies were visible as they peeked up over the top. I could see when the birds were ready to fledge, and then one day they would be gone. They made a terrible mess on the stone porch; I scrubbed it and put newspaper down to catch the droppings, but still their shit caused a permanent white stain on the stones. It’s odd to think that the stones had been there for nearly 200 years and now they would forever bear the mark of a pair of stubborn swallows.

When I arrived this year the swallow nest was gone, thwarted by a chicken-wire cover that Greg had put over the light. The swallows were so persistent that they tried to build a nest right beside the porch light, but Greg, who was probably as sick of cleaning up after them as I was, had persistently knocked that one down too. I couldn’t see where the swallows had built their new nest, but the first few days I was there they went back to their menacing swooping to let me know how unhappy they were at their treatment.

There are other creatures living in the woods. Minks and voles certainly. Rabbits and hares. Grey squirrels, unfortunately, transplants from America (a couple was given with a pair as a wedding gift and now they are everywhere). Red squirrels, perhaps. I saw one red squirrel up near the Ballindoolin walled garden. They are regaining some population, although seeing one is still very unusual. William, who is six, proudly told me when I first got to Ireland that he had seen one, and the very next day I saw it too. I don’t think there are badgers; a badger sett would be noteworthy. There must be hedgehogs, although I’ve only seen them once, on the road at night, over the many years I have been coming. I have seen foxes. Ireland exterminated the wolves a couple of hundred years ago, but the foxes have been allowed to thrive and I have seen many of them when I’ve been out at night. On this morning walk I found fresh fox tracks in the soft mud; I liked being the first animal to walk there after the fox had passed 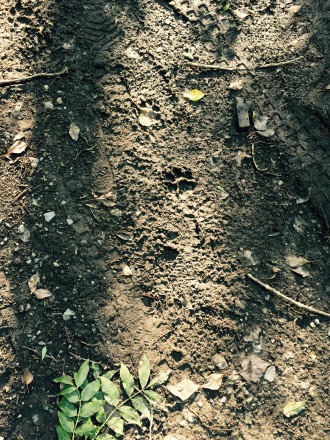