Back in Irelalnd! The night after I arrived I went to a dinner party (see One Way to Live in a Mansion). There were ten people there, only three of whom I had met before. It was, as usual. lovely. 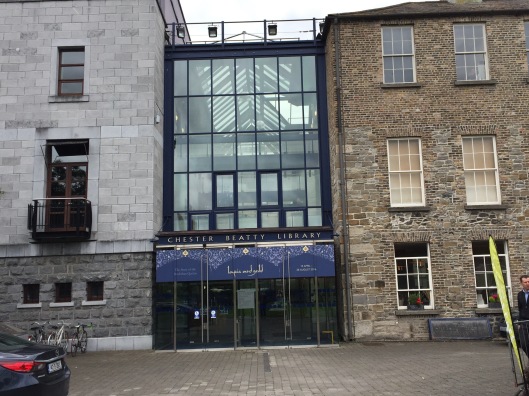 The next day I woke to the realization that if I didn’t go to Dublin that day I may not get there at all this trip. At 10am I hopped in the car and headed to town, not having a plan for when I got there. While on the road I decided to visit the Chester Beatty Library. I hadn’t been there in at least a couple of years, except to eat in the café. I parked at Euston Station, took the LUAS into the center of town, then walked across O’Connell Bridge and through Temple Bar, already teeming with tourists, to Dublin Castle, where the library is located.

Chester Beatty was an American mining baron who started his career shoveling rock in Colorado after training as a mining engineer. He parlayed his knowledge of mines into a fortune, moved to London and, on a visit to Egypt with his second wife (his first wife died of typhoid), bought some Egyptian decorated Qur’ans in the market. He added these to his growing collection of European and Persian manuscripts, later setting up winter housekeeping in Cairo. A few years later he became equally enthralled with Chinese and Japanese paintings, and added these to his ever-burgeoning collections.

Ireland became the repository for these books and manuscripts after London rebuffed his offer of a gift. In 1957 Sir Chester became Ireland’s first honorary citizen. The library is now in trust to the public, and admission is free.

Of all of the treasures in the Beatty collection it is the papyri that are the most compelling. The collection contains some of the earliest and most important of the Christian biblical papyri; these texts are bound in papyrus pages rather than scrolls, providing a link between Christianity and the development of the codex. The collections are shown in two permanent exhibition spaces.

A third space holds the changing exhibitions, which are wide-ranging. The last exhibition I saw there was Matisse’s Jazz; this time the library took advantage of needing to dis-bind a copy of a rare sixteenth-century Persian Qur’an to show many of its pages. The wall signs included information about the conservation of this book, including explanations about why it had to be disbound; one case showed the book’s nineteenth-century binding and explained that the pages would be rebound into the same binding once the exhibition ended.

The Beatty Library holds classes and workshops, many in techniques from the Middle East or Asia such as marbling and calligraphy. Free yoga classes are held on their roof garden. The sense of community engagement is clear.

The rest of my Dublin day was devoted mostly to walking and books. After a quick stop at the Douglas Hyde Gallery on the Trinity College Dublin campus where Caoimhe Kilfeather’s maximally minimal works were on show, I made my ritual stop at Ulysses Books, a second-hand shop (formerly Cathach, changed recently when the owners gave up hoping anyone could pronounce the name—CahHah). There I found a copy of Hilary Pyle’s biography of Jack Yeats, now out of print. (There is a chance I will be meeting the author next week, so this was providential.) Around the corner is Hodges Figgis, for new books. Like all Irish bookshops, books by Irish authors and books about Ireland take up the lion’s share of the floorspace.

Home again, via my favorite local pub, Furey’s Bar, where Esther and I ate baked haddock and salad. Definitely a grand day out. 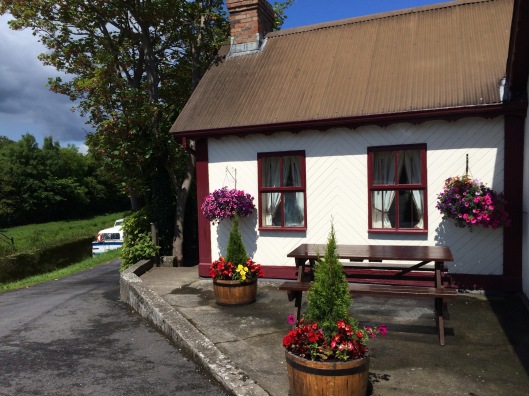 1 thought on “A(nother) grand day out”