Last evening, sometime after 8pm, Breda came by the house where I am staying in Tipperary to pick me up and take me on a walk. I have been on Breda’s walks before. They are always adventurous; she loves walking and a physical life. She’s an expert horsewoman, a retired teacher with a good command of Irish and an absolutely intrepid outlook. Her husband Greg is a mountaineer who travels the world to do climbs.

For this walk Breda drove us into the Knockmealdown Mountains, one of three ranges that ring the Tipperary valley. We stopped in town to pick up Siobhan, a friend of Breda’s and another dedicated walker. 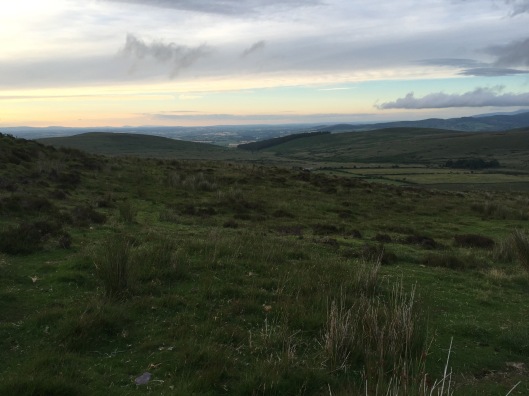 I had never been on such a late evening walk before, but the sky stays bright until nearly 11, and yesterday had been one of the most gorgeously sunny days I had ever seen in Ireland. By the time we drove to the end of the rocky dirt lane, more like a worn line in the earth than a road, the light was holding and the weather was balmy, with just enough breeze to keep us cool. We set out over the hill on an invisible path, going up the slight incline (what they call mountains are friendly here) and striking out through the heather and ferns.

I have been on very few walks in Ireland that follow established trails. Walks here are created where the walker wants them to be. Since bogland is not an issue in Tipperary, there is no need to worry about suddenly sinking up to your waist in muck. Holes and ruts in the land are another issue. The ground nearly everywhere is rough, necessitating good boots with ankle support and keen observation about where you are about to step. In these hills the general rule is to follow the sheep trails, since they invariably find the best route. For this walk Breda shared one of her hiking poles with me (the Irish don’t use the word hike; a walk is a walk whether difficult or meandering).

Around 10pm we came to a Mass Rock. This one was a natural outcropping tucked into a small gulley and sitting by a stream. This is the first Mass Rock I had ever seen. 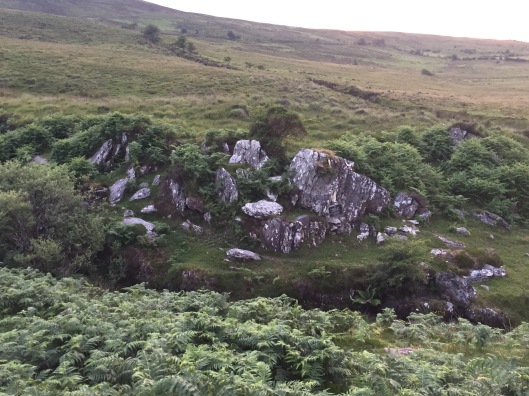 They were used in the seventeenth century for clandestine Catholic services when Catholicism was outlawed after the 1695 Penal Law. The piece used for the altar was usually taken from a church ruin and transplanted to this hidden and otherwise natural location. 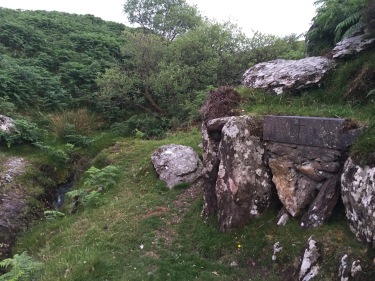 Services were announced by word of mouth, since they couldn’t be held at regular times. This Mass Rock, which is now commemorated with Virgin Mary statuary and a plaque, is the location for an annual pilgrimage of remembrance of the time when Catholics were refused the right to worship, priests had to register and bishops were outlawed.

After the Mass Rock the three of us moved at a more concentrated gait, aware of the gathering dark and the promise of a stop at the local pub for a well-deserved glass of Guinness. We passed an isolated cottage, owned now I was told by a 20-something Irish woman who is a sheepherder like her father in Scotland. All over Ireland these cottages exist, many in ruins but some like this one, and like the one I am staying in, brought into the twenty-first century as places of refuge, contemplation and creativity but also energy, resourcefulness and renewal.

1 thought on “An Irish walk”